Finding Grenfell is intended to convey the wide influence that Dr. Wilfred Grenfell and his medical mission had on the people and communities of southern Labrador. Research for the project revealed that our resources only allowed us to scratch the surface and that there were many stories that did not fit neatly into the main themes. This panel presents a few of those stories. 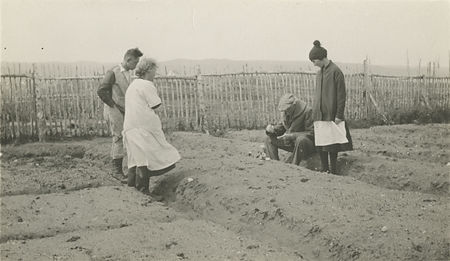 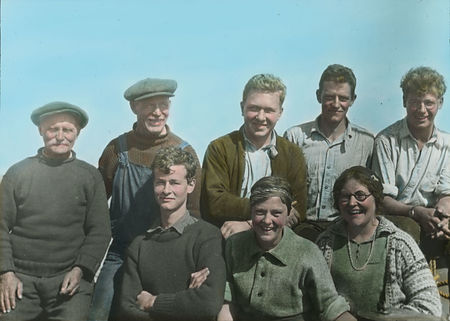 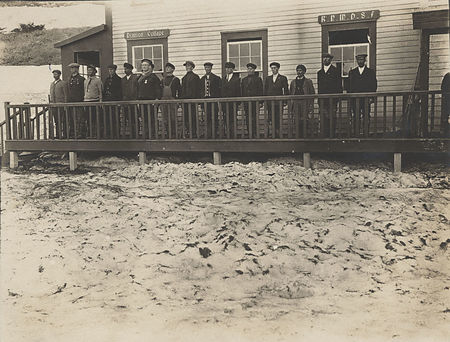 16 men standing at attention with rifles along verandah of Denison Cottage; two identified on verso: Dad first [Hubert Bromley Williams, father of Drucie Stavdal] with Dr. [Arthur] Wakefield, 6th with a medal on Labrador. The Rooms Provincial Archives, A 108-45.

Marguerite Lindsay was described as a society girl by a widely circulated newspaper report after her disappearance at Muddy Bay, near Cartwright, in August 1922. That was possibly the only accuracy in the sensationalized account of her abduction by a group of "wild Labrador natives" that originated in London and was published throughout Canada and the United States.

Miss Lindsay was from Montreal and had volunteered to spend the summer of 1922 at the Labrador Public School at Muddy Bay, where she ran a recreation program and taught the older girls at the school sports such as swimming and cricket. On August 4 she left for a walk alone, as she often did. A search was started later that day when she did not return by suppertime. After five days it was concluded that she had slipped on the rocks and drowned. Her body was finally found by hunters in December about half a mile from the school.

A full judicial investigation was carried out and concluded that she had gotten tangled in undergrowth and accidently shot herself with her own gun, which she apparently carried to shoot muskrats.

Elizabeth (Lebe) Craig was the daughter of a Scottish industrialist. David Tokimasa was an agricultural student from Hawaii studying at Cornell University in New York. They were brought together by the Grenfell Mission in southern Labrador in the summer of 1933.

Lebe Craig had spent several years assisting with industrial work and other activities at Forteau and Vermont. David Tokimasa was a volunteer with the agricultural program at Red Bay and Forteau. Miss Craig apparently enthusiastically took on the challenge of getting the Forteau gardens back in shape. The couple were married in New York City on April 12, 1934. In 1938 the Tokimasas moved to Japan when he took a post with the press division of the foreign office in Tokyo.

Romance again bloomed in Forteau in 1949, when Scottish nurse Iris Mitchener met American doctor Tony Susen, who was ship's doctor aboard the Blue Dolphin, which was on a scientific expedition from Dartmouth College to Labrador. The ship was delayed at Forteau by pack ice early in the summer. The two married in Illinois on December 27, 1949.

The little girl who became known as Eva Grenfell Corey was born at Battle Harbour on December 20, 1917; she was the daughter of John Samson of Battle Harbour and his wife Annie Toms from Fox Harbour (now St. Lewis). Her mother died at the Battle Harbour hospital in August 1918.

When her father signed up to go overseas that fall, Eva was sent to the Rev. Hollis Hamilton Corey and his wife Constance at Mutton Bay, Quebec in what was then known as the "Canadian Labrador". She was legally adopted by the Coreys, who had been stationed at Battle Harbour when she was born, and baptized Eva Leonora Grenfell Corey on October 6, 1918.

The Coreys later went to Japan as missionaries, where Eva contracted spinal meningitis. She survived but was left with epilepsy. When the family moved to Hawaii in the late 1920s Eva became ill again and was sent to a hospital near Quebec City. She was reportedly healthy when she visited Toronto with her adoptive parents in 1931, but died at a hospital in Chicago in 1940 when she was 22 years old.

As an aside, Eva's birth father John Samson never did make it overseas. As the local story goes he and his fellow enlistees were waiting for the coastal boat that would take them to St. John's when news arrived of the Armistice and the end of the war in November 1918. He remarried and had a family in the Battle Harbour area. 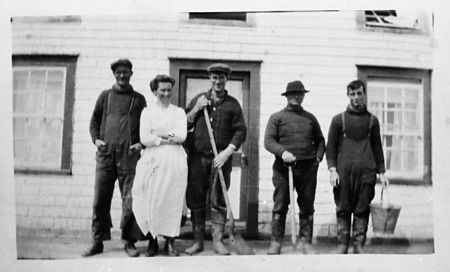 Sidney and Mary Fowler on the left. Other three men are fishermen from Newfoundland. Them Days Y061. 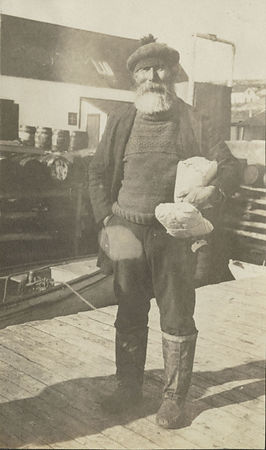 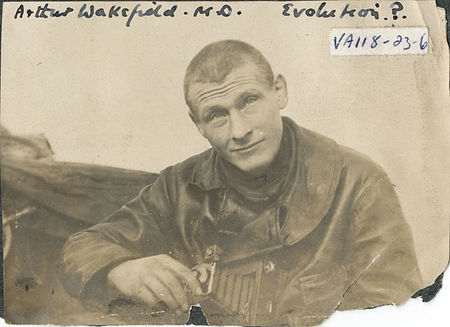 Dr. Wilfred Grenfell met, treated and touched the lives of many on the coast of Labrador during his career. Without doubt, many called him a friend. The Wilson's home at the Hudson's Bay Post in Rigolet was a regular stop for him, according to Kitty (Wilson) Kettie, who worked for the Mission for many years.

At Fox Harbour, now St. Lewis, there was George and Martha Holley. They apparently welcomed Dr. Grenfell on many visits to the community. Letters from them published in the Among the Deep Sea Fishers allude to gifts that they received through the Grenfell Mission. In a preface to one that appeared in 1927, Dr. Grenfell noted "It was Uncle George who taught me what hospitality meant." After George Holley died a cottage, made possible through money donated by a Miss Urquhart of Montreal, was built for his widow Martha at St. Mary's River. She did not live there long however, as she preferred to return to her Fox Harbour home.

At West St. Modeste, the Fowler family is remembered for hosting and taking care of Dr. Grenfell and his workers and volunteers when they visited the community. According to family members, this started with William Fowler when Dr. Grenfell first arrived in Labrador. His son Sydney and his wife Mary later took on the responsibility. Uncle Sydney and Aunt Mary, who had no children of their own, also spent time, especially during winters as they got older, helping out at Denison Cottage in Forteau. Aunt Mary lived at the Louie A. Hall Nursing Station in Forteau until her death in 1968.

Over the years Dr. Grenfell's Mission attracted a wide variety of motivated and talented volunteers and medical professionals. One of the more colourful was Dr. Arthur Wakefield from Keswick in the Lake District of England, known best as a soldier and adventurer. Wakefield was educated at Cambridge and was studying medicine at London Hospital when the Boer War started; he signed up and served as a trooper in South Africa in 1900 and 1901. He came to Labrador with Dr. Grenfell in 1908, perhaps in search for further adventure.

During his time with the Mission he married Marjorie Younger from Montreal. He also had opportunity to continue his passion for climbing, which had started at home in the Lake District, in the Canadian Rockies. As a soldier, he was drawn to the Legion of Frontiersmen, an organization started in 1904 by a fellow Boer War veteran. The organization was established to prepare men for military service should it be required. Wakefield established a branch of the organization in Labrador.

When World War I broke out in 1914, he immediately signed up with the Newfoundland Regiment and later became part of the Royal Army Medical Corps. After the war Wakefield and his wife settled for a time at Mégantic, Québec, where he opened a medical practice.

In 1922 the adventurer in him resurfaced when at the age of 46, he joined the first major British attempt to reach the summit of Mount Everest. Although unsuccessful, the expedition members were awarded a medal during the 1924 Winter Olympics. After the expedition Wakefield returned to Keswick where he again set up a medical practice. He died there in 1949. In 2012 Wakefield's medal was taken to the summit of Everest by climber Kenton Cool.

Letters from George and Martha Holley thanking Dr. Grenell for his Christmas wishes and acknowledging several gifts that they had received through the Grenfell Mission were published in: 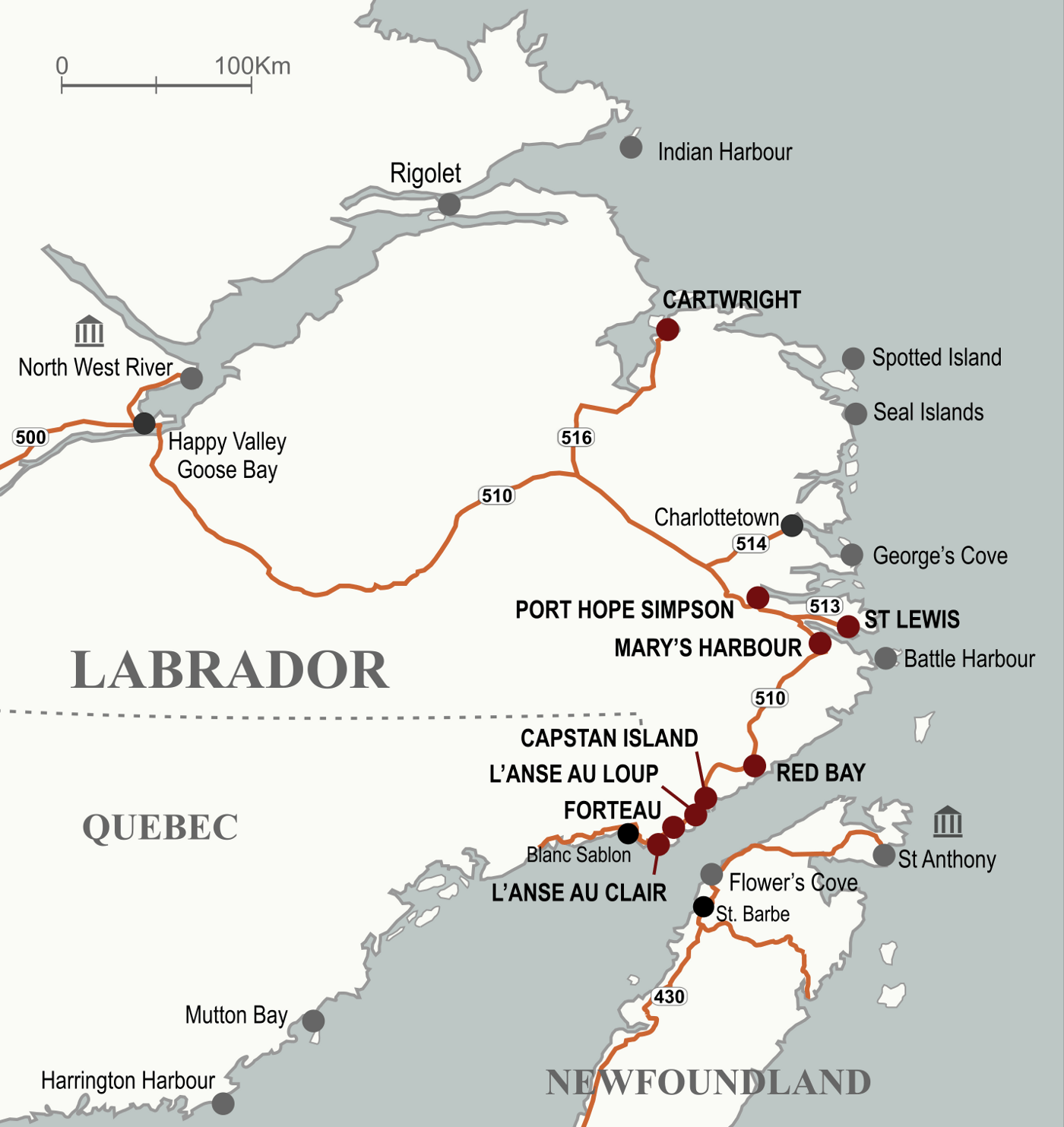 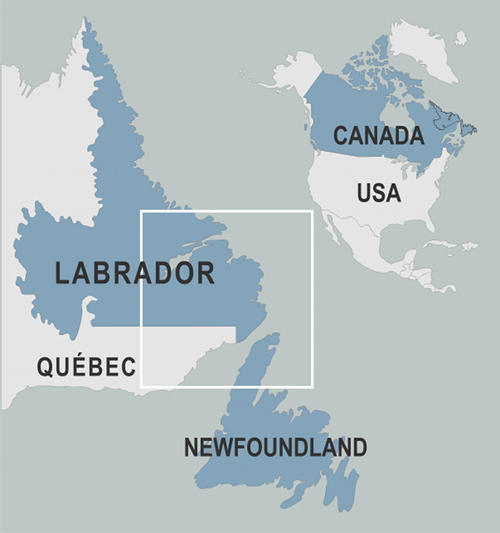 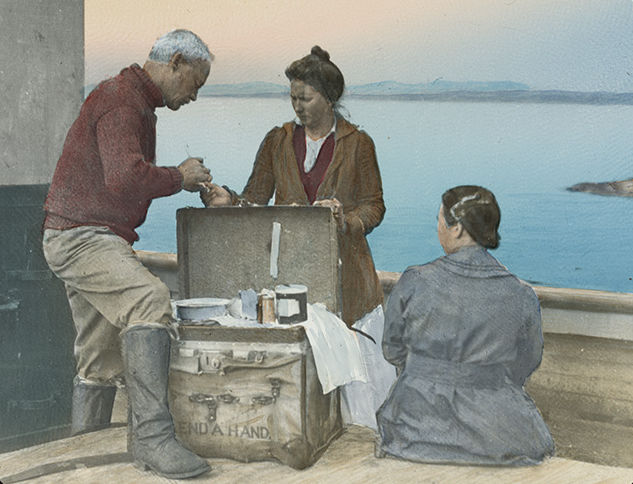